Youngstown, OH – Thousands of people standing behind House Bill No. 108 (Nitro’s Law) are celebrating this afternoon as word spreads that the House of Representatives passed the measure with a 79-9 vote.

The push for Nitro’s Law began after a horrific act of cruelty which took place at High Caliber K9 back in October, 2008. Nitro, a Rottweiler, was one of eight dogs who were starved to death while under the “care” of kennel owner, Steve Croley. 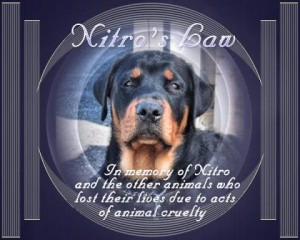