All About Trap-Neuter-Return for Feral Cats

Did you know that tens of millions of stray and feral cats are living (and reproducing) on the streets of the U.S.? What’s the most effective way to deal with the homeless cat overpopulation problem? Experts believe that trap-neuter-return (TNR) is the best way to address this issue. What is TNR? Here’s a quick overview… 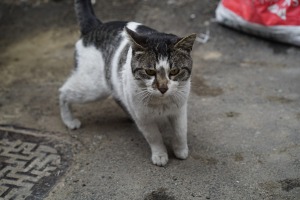 But first!  …What’s the difference between a stray and feral cat? A stray cat is a tame cat that has been socialized to people at some point in its life, but has become lost or abandoned and is now living on the streets (not always by choice). A feral cat has had very little contact with humans and will show fear towards people. Feral cats usually choose to live on their own outdoors and generally can’t be socialized enough to become house pets.

What are the components of trap-neuter-return?

Trap: Humane traps are set up near a colony of cats to trap as many of the group as possible. Neuter: The cats in the traps are taken to a spay/neuter facility where they are altered (and often vaccinated for diseases like rabies). Return: One quarter of an inch is removed from the tip of a neutered feral cat’s left ear while the cat is under anesthesia. Ear tipping is a way of indicating that a feral cat has been fixed.  The cat is then returned to its colony. 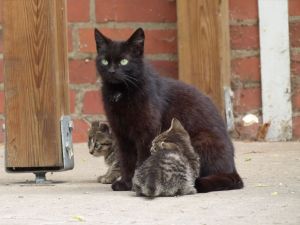 TNR helps to reduce the number of homeless cats on the streets…and in animal shelters. To learn more about TNR, check out the website for the advocacy group Alley Cat Allies.

One thought on “All About Trap-Neuter-Return for Feral Cats”