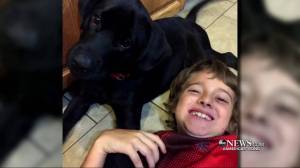 You probably remember the viral video from a while back of a young boy who would jump off his bike and run into his neighbor’s garage to give their dog a big hug. The video charmed everyone who saw it, and now there’s a heartwarming update to the story. This adorable animal lover now has his own dog to love!

9 year-old Josh Breaux of Louisiana began to visit his neighbor’s pup not long after the family dog he had since he was 2 passed away. Josh’s mom explained that they were hesitating to get another dog right away, and Josh was definitely missing his canine cuddle buddy.  (His mom reports that she and Josh’s sister were dog huggers too!) 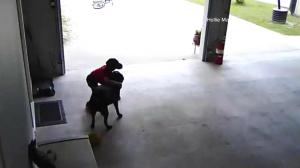 After the video went viral, the family was contacted by many people looking to give Josh a dog. As this story from ABC News shows, Josh finally got his very own puppy! A 3 month-old black lab named Drake became Josh’s new canine sibling. Drake came from a family in the neighborhood whose son just went away to college…so, a very happy ending for both Josh and Drake!

Check out the video on the ABC News website HERE.

8 thoughts on “Heartwarming Video: Boy Spotted Hugging Neighbor’s Dog Gets a Pup of His Very Own!”